There are none more asleep than those who think they are awake. ~ Michael Doherty

So, I woke up this morning thinking about understanding the world, critical thinking and questioning reality. Something that has been bothering me a lot lately is judgement. Now, I know I can be a judgemental so-and-so. I accept this. I actually quite appreciate the ‘me’ that judges what works for me and what doesn’t. Sometimes I go too far, sometimes my ego likes to get itself into a jolly superiority complex, but that’s just when I’m unprepared to consider things more deeply.

One thing I have been seeing a lot of lately, because of the global divisions taking place, through politics, referendums, gender identity and more so recently ‘spiritual’ people is a whole lot of judgement. ‘I’m right, they are wrong and not only wrong, they are stupid, and they are not only stupid but ignorant and asleep’.

I put ‘spiritual’ in inverted commas because I think sometimes, we expect people talking politics to have strong judgements of others either way. Certain topics provoke passion, anger and often resentment. Now in the spiritual arena I am seeing some (not all) share a lot of spiritual superiority and arrogance.

Something Michael (the author of the above quote) said to me once was that people who are genuinely humble, don’t say ‘I am humble’. They just don’t, they simply live it.

What I am seeing in spiritual quarters is people saying how awake they are, but not realising that by saying this they are implying that other people are asleep, thereby inferring that others are less-than.

And not only do they not realise that truly awake people don’t think they are awake, but it is the ego that likes to think it is awake, and therein lies the problem.

Truly awake people, just live, be, act, like those who are genuinely humble.

I know I have had friends I have known for years unfriend me recently, because my recent more controversial and challenging thoughts I share have been defined as unawake, asleep, stupid. I can live with that, but when I see the same groups state how awake they are, how clued up they are on what is happening with, for example, Coronavirus etc. and how much they are glad they look inside as if they are really awake, I just call BULLSH*T

Belonging to A Group is A Big Pull 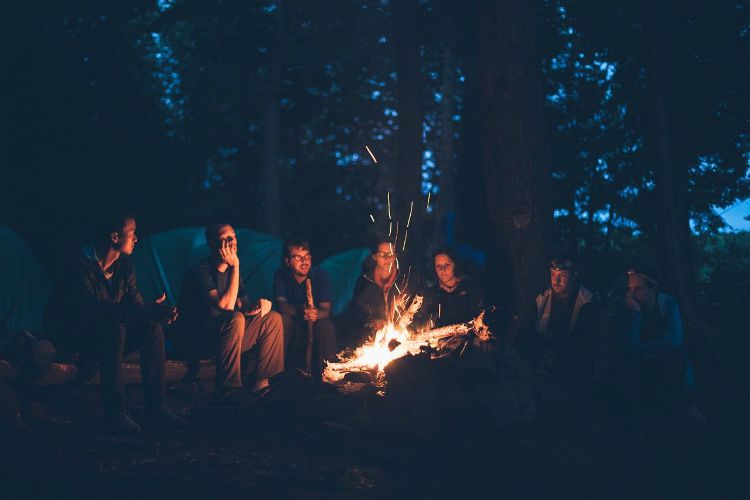 I was part of echo chambers like this for years. One of the reasons I stepped away from many spiritual circles. Sometimes under the guise of spirituality people can mask the hugest egos and inferiority complexes. I know I did. I remember back in the day I was a member of numerous groups online. We were part of the leading edge of thought, the inner circle, those of a high vibration. We were so up our own arses it was unbelievable. And we all gave a wonderful congratulatory pat on the back every time one of us said something that matched the group dynamic and narrative.

I’m extra watchful of myself now if I fall into a specific group in society. At the moment because of my political choices, I voted against my social tribe, and now people view me as far-right which is often the go-to judgement of anyone who steps outside the lines of what is commonly known as conventional thinking. I’m not far-right, I’m not far-left either (I was far-left at one point). The extremes are just that, extremes, and most people fall nearer to the centre or on the centre point.

I think I mentioned in a podcast recently how I had seen something I felt was loving on twitter and the group I was more in line with tore my compassion to shreds and misinterpreted me as far left. Fixed views are not something I want to keep. So if I see someone in that group saying something, I question it, the same as I would of any group.

When I was part of spiritual circles, once I started to question things, that’s when problems arose. I was looked on as going against the ‘tribal narrative’. I guess I am a provoker in many ways; I don’t like to stay fixed or rigid. Alive is flexible, death is rigid. My views today could be entirely different tomorrow if new information appears that makes me adjust my current thinking. I am prepared to shift, because if I don’t then the only person who suffers is me.

I’ve had to bite my tongue a lot lately, because people who I once resonated with, still hold the same views, many getting stronger, more judgemental. It’s uncomfortable to watch, so I just step back from them now.

Echo chambers, be it echo chambers about scientific topics, politics, coronavirus, gender identity are simply that, echo chambers. If we cannot or will not look outside those echo chambers, we will remain stuck, not only that but we lose out on good friends and family because we are unprepared to budge.

I’m watching a thread on twitter right now, from a strong remainer (voted to remain in the EU). He is being honest that he has remainer friends and leave friends. He values them both and sometimes things get heated, but they let it go and just continue being friends. On the other hand I saw a lot of remainers on this thread refusing to allow leave voters to ever be in their lives again. Choosing to hold grudges, choosing to stay in their echo chambers and choosing to miss out on a whole lot of love and potentially great relationships.

I’ve also had people unfriend me because I understand why people voted Trump in 2016 and because I don’t think all Trump voters are evil, uneducated oafs. Why? Because for four years I experienced what it feels like to be a Trump voter in the UK. I experienced all the name calling and judgements flung at me and I questioned whether my judgements of Trump voters were correct. And I have some lovely Trump voter friends, the kindness, smartest and most generous people I know. I also have the same voting for the opposition, albeit, like remainers, more of those are strongly hating and judgemental of Trump voters.

The extremes are judgemental of each other, both exactly the same. I actually compared two threads on Twitter one day. One was a thread of primarily left wing voters, the other primarily right wing voters and do you know what I saw? The exact same judgements of one another, the exact same rationale. You could have swapped them over and not told anyone and nobody would have seen any difference whatsoever. Of course, this does not go down well when mentioned publicly.

So if you think you are smarter, better, more awake, more humble, more intelligent, more educated, do more self-work, are more clued up, better researched than your average person out there – think again!

You may well be in a very close tight knit echo chamber bubble.

You’re not on the leading edge of thought.

You’re not of a higher vibration.

Because if you were, you would have no need to say this or even think it.

Only the ego likes to think in these terms.

Change your mind, think outside the box, make sure the box is not masked by being ‘awake’ (but is still a box) and remember the person who has the ability to always be a beginner, to always make mistakes, is truly living.

Make sure you are truly living.

Love what you see? Buy Kelly a coffee or donate monthly below