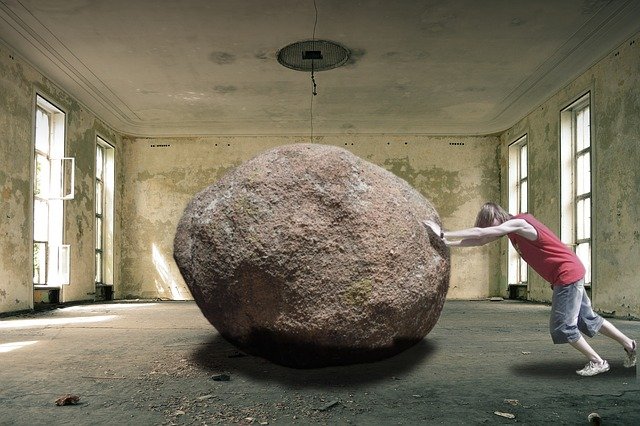 Yesterday I picked an Osho card that was quite deep and fairly immense in terms of a message, and it re-confirmed another message I had received from a gentlemen who leads a mediumship circle I have recently become involved in.

Part of the Osho message said:

When we carry a load of shoulds and shouldn′ts imposed on us by others we become like this ragged, struggling figure trying to make his way uphill. ″Go faster, try harder, reach the top!″ shouts the foolish tyrant he carries on his shoulder, while the tyrant himself is crowned with an imperious rooster. If life these days feels like just a struggle from the cradle to the grave, it could be time to shrug your shoulders and see what it feels like to walk without these characters on your back. You have your own mountains to conquer, your own dreams to fulfill, but you will never have the energy to pursue them until you release yourself from all the expectations you′ve gathered from others but now think are your own. Chances are they exist only in your own mind, but that doesn′t mean they can′t weigh you down. It′s time to lighten up, and send them on their way.

This re-confirmed the message I was given at circle. I was told by spirit that I needed to be more aggressively, bluntly, fully myself. And to some, the word aggressive may seem unkind, but I knew exactly the message spirit was conveying. Still a recovering people-pleaser, I recognise in myself that I speak and communicate often against my own feelings. I have always had a smile on my face regardless of how I am feeling. And one time my best friend saw me walking along the street, and one of the few times I decided to intentionally relax my face when walking, he interpreted it as I was looking pissed off or fed-up.

And so how many of us wear a mask of smiles when behind the smile is pain, suffering, sadness and anger?

I readily admit, I find it incredibly scary the thought of being aggressively me, because being aggressively me is similar to the character Phoebe from friends, honest, open, without the need to cover, molly-coddle, walk on egg-shells self-expression. Phoebe is totally herself, she speaks clearly, she knows who she is and when she speaks there is no manipulation, no hidden agenda, no mixed messages being sent out, she is who she is. And oh I so long for this.

But wanting this and being this, scares the beejeebers out of me. Why? Because a part of me has been carrying the expectations and shoulds of this world for so long, since childhood, and I am not sure what is me and what is other people’s expectations or even my interpretation of what I think the world expects of me.

So how do we peel back the layers of the world to reveal our true selves? And even more so.. how do we express ourselves without beating people over the head with ‘judgement’ ‘this is right’ or with the ‘angry stick’?

As a Geordie, from the North East of the UK, our accent can come across as aggressive as it is. Often when I am not feeling angry or upset or being critical, it comes across as if I am, when it’s simply the accent tone in my voice. I’m also aware that in the past when I have been clear, and said what I was thinking, the reaction from others has been either anger, walking away or ignoring me completely. I walked the path of being invisible for so long for fear of hurting others and feeling hurt by others.

Being Sensitive To Energy

When I express myself I can feel the other person’s response to what I’m saying energetically, so much so that it literally feels like a knife in my gut. So how do we strip back the layers and feel safe to be who we are? And to do so at the risk of losing friends, pissing people off etc etc..

I guess we need to remember that we have probably been holding ourselves back for so long so that we don’t hurt others’ feelings, yet in the process we have given ourselves a prison of our own making, because by not being ourselves we have been indeed hurting ourselves instead.

I’m currently not blessed with a lot of friends, still processing and working through the whole ‘deserving’ issues in my life, so in a way I have little to lose. But as I begin to develop new friendships, I really need to start where I am, start from here, and be who I really am, don’t I? And the story playing shouts very loudly ‘BUT what if they don’t like me?’ ‘What if they don’t like me for who I really am?’ ‘What if I piss off the entire world and i’m alone FOREVER!’ OH my… what a story stuck on repeat mode this is, so all I can do is face the fear and do it anyway.

BUT BUT BUT… there is a lot of fear coming up.. little me is saying ‘I’m scared!’.

Yet I know it’s time.

Writing For The Audience Instead

I realise that my writing has suffered a bit of a writers’ block for a few months now, the longest I’ve felt uninspired, and I realise that I had slipped into writing to what the audience expected, thinking about ‘What do people want to read or know about right now?’ Instead of what do I need to write about and what do I need to allow to flow out of me. So i’m going to take my blog back to its roots. Back to when I just shared my thoughts, my feelings and any natural inspiration that came through me.

Now, don’t get me wrong, I don’t think my previous posts are rubbish, far from it, I was inspired around certain topics of ‘shoulds’ that I felt people wanted to read, but now it’s time for me to speak once again, for me, regardless of what anyone wants, or regardless if anyone will ever read what I write.

What layers are you resistant to stripping back? Are there any shoulds running your life show?
If you enjoyed this post you may enjoy my