Today I am going to talk about both owning your power and why bowing down to the demands of demanding people is not a good direction to go in.

It’s interesting that this topic cropped up for me today, especially considering the Western world is doing a lot of bowing down, apologising for perceived past oppression, perceived present oppression and so much more.

In my own life I have bowed down a lot in the past. As many of you will know, I never really had a good sense of my own value or worth. My self-esteem used to be very low to non-existent. Due to some early life programming, I was taught that choosing to express myself authentically, following my true nature, was both wrong and to some, shameful and embarrassing.  So, I learned early on to keep my head down, keep my head below the parapet and become invisible.

Reinforced programming continued and I think in many ways that my true voice, my real self just got crushed further and further inside of me, where she lived for a long time in a dark dank prison.

More recently, that has all changed and after losing my power or rather giving it away to more demanding and aggressive personalities, I took my power back. I reclaimed my sense of self. I learned my own value and I protect it fiercely now.

In the modern Western World right now, with movements like Black Lives Matter, Transgender activism, Political Activism… all isms basically, there seems to be a demanding quality to them. A demand that the opposite or perceived persecutor both apologises and literally and physically bows down to the perceived oppressed.

This could be through apologising publicly, taking the knee, refraining from expressing opinions through debate, using politically correct stifling language or refusing jobs because an oppressed member of a group could miss out on that job because they have taken it.

Some examples being this week Halle Berry the actress from ‘X-Men’ and other movies apologising to the trans activist movement for taking a job portraying a trans-gender man. To me it just felt ridiculous, because acting is acting and most movie producers will ask a well-known actor or actress to act a role, because it gets more bums on the seats in cinemas, but that aside. To apologise and to turn down the role to give others an opportunity, is like having a kitchen full of delicious food and not eating it because someone somewhere in the world is living in poverty and going hungry.

In the UK, we have had politicians taking the knee for the Black Lives Matter, to only later realise the movement has some more corruptive ideas about what they want and then having to step back from what they did.

We have white celebrities apologising on camera in the most virtue signalling ways ever, to profess their apology for white privilege. We have even the BBC putting down white women in a judgemental way calling white women Karens who are pretty much all racist.

There are so many examples of bowing down to demanding people or groups right now, I could go on forever, but the point I am making is, apologising and bowing down does not end there. If someone or a group is that demanding, they will see this as a weakness and demand more. It is not different to holding someone hostage and demanding a ransom. One day you’re apologising, the next you’re on your knees, the next you’re on the floor, and there’s no empowering place for you to go from there.

In the UK I watched in horror as our London police officers (not all of them thankfully) took the knee in front of a baying angry mob. I understand if you did this in a sacred way, with understanding, open individuals, but the people in front of them were literally screaming abuse at them. This was submissive, not strong. 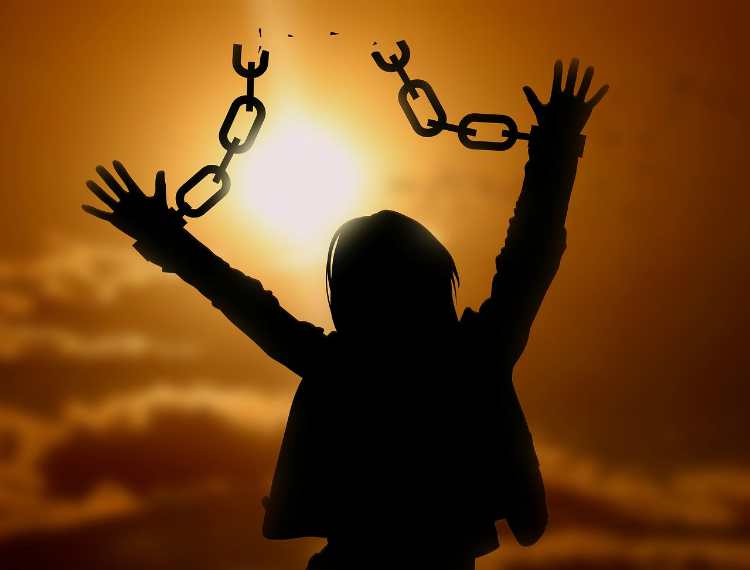 Anyway, going off on a bit of a soap box there, but I know how it feels to bow down to demanding and aggressive people. And it certainly doesn’t promote balance, harmony or self-empowerment in anyone.

It’s taken me 40 years to finally free my voice. If and when anyone tries to control my ability to express myself, I do not bow down, I do not apologise, I do not do what they say.

And this is not insolence or arrogance. If I feel I have done something wrong, I will apologise or stop it, but if I know I have not, I will no longer stifle my right to self-expression.

As always, it is never our responsibility how another person reacts to who we are. When we begin to change our life script and no longer follow the old script people were used to, that script could have been being more quiet or submissive; that script could have been following along with the crowd of family structure. And then when you realise that this is not your script, you change it, they will not like it. Some will not care or be indifferent, but others will really hate it, because if your script changes they are no longer in control of you or your message.

We can bow down as a signal of respect and sacred prayer or we can bow down because we feel guilty, wrong, bad or small. What we choose says a lot about who we are at the time.

We can bow our heads in shame or hold our heads up in pride.

I choose to hold my head up in pride.

People can judge us, misinterpret who we are, but we know who we are, and we can stand proud in that.

Are you bowing down or rising up?

Thanks for listening to this episode of Kelly Martin Speaks

Support The Podcast – Donate or Buy Kelly a Coffee