Finding My Beauty Amongst The Ugly Voices In My Head

So, in my forties I’m starting to unravel shame – body shame.

Like many women, I’ve spent most of my life trying to fit in with the ‘ideal’, from seeing Disney princesses as a child, to airbrushed magazines and ‘perfect’ bodies in movies and TV, my body was slowly over time internally shamed by me.

Brainwashing begins early on for many of us. It may not seem so, but even before the days of the internet and airbrushing, we were all unnaturally encouraged that we had to be deemed beautiful or enough.

When every girl or woman is slim, every girl (or boy) is white with perfect skin, it’s hard for children not to take this in.

When I entered high school, I hid my beauty. I was incredibly shy and self-conscious; my hairstyle was more boy-style and my body was straight up and down. I had buck teeth and nature gave me acne also. I towered over most females and I was often the tallest girl in the class. I was bullied, some, but also somehow managed to remain invisible. I did all I could to blend into the background and managed it successfully.

Being called lanky and goofy by the school bullies made me develop a complex about my smile. I have such a big smile and I smile a lot, but this knocked my confidence until my late thirties when I did EFT (emotional freedom technique) on the pain I felt about my teeth.

The Messages of Shame

When I was a teenager my oldest female cousin told me I was straight up and down, that there was no shape to me and she did so with a snigger. So I was triggered and thought my straight body was not the ‘ideal’.

But probably one of the most strongly expressed criticism happened when I was 16 and I was out with my first boyfriend. We were relaxing with his friends at someone’s house, just me, him and his male friends. He was being very aloof and withdrawn from me so I asked him why he wasn’t able to look at me and he said, ‘Because that beer-can is more attractive than you are’.

One of his male friends actually said it was not on that he said that, so some of the men in my life were respectful of women, but I thought I deserved the criticism and did not end the relationship, instead he ended it eventually. In a way, this set me up to accept poor treatment from partners until later in life.

And when the contraceptive pill made me gain weight and made me emotional in my early twenties, a boyfriend of 2 years left me for another woman he had been cheating with for 6 months. She was slim and his ‘ideal’.

So as the years went by, I totally lost my confidence and took up binge drinking from my teenage years until I was 24. Watching how the world viewed ‘imperfection’ scarred me like many women. As I was watched a friend be harassed by a man in a bar once, who said ‘You would be really pretty if you had better skin’ really sunk in, deeply. I didn’t feel able to be this perfect ideal, but I tried for a very long time, until my forties.

When I developed acne rosacea after my father’s death, this was the running script flooding through my mind:

One week in my forties I was shopping for some new clothes and saw my reflection in the mirror, the side-view of my stomach, and my jaw dropped to the floor. I looked pregnant in my eyes, I was horrified. So I exercised more, ate less, but the number on the scales just didn’t change, no matter what I was doing. I knew something was wrong here, I was becoming great at embracing my feelings and my emotions, but I had forgotten to love my body. 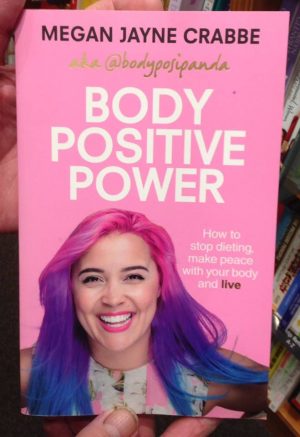 And so in August 2018 I came across the body positive movement. Browsing my local bookshop I saw a book called ‘Body Positive Power’ by Megan Jayne Crabbe and opened it on a random page and it really spoke to me. I googled and instagrammed body positivity and I saw all these new larger ladies wearing bikinis proudly and confidently. I saw cellulite flaunted as beautiful and my eyes opened wide.

To recognise that my idea of beauty was not true, not real and not authentically me was so empowering. Why didn’t I see my skin, my smile, my belly, my cellulite as beautiful? Because society and the media had sold me the idea that everything I was, was a disease, a mistake or a problem to be fixed. It had me focus on what I was lacking, not that I was enough.

I was told my teeth were wrong and needed straightening.

I was told I needed lotions and potions to fix my acne and cellulite.

I was told my belly should be flat and toned, not curvy and soft.

I was told cellulite was something I should work on getting rid of.

And the ideal changes, depending on what the sales people want to sell and make money from.

And let’s not forget the whole idea that aging is wrong and so we must stop it happening, as if it is unnatural and fixable.

This is absolutely BULLSHIT!

This body positive movement needs to grow so that instead of an epidemic of mental health issues, eating disorders and a general self-esteem crisis, but instead we need an epidemic in self-acceptance, self-kindness and self-compassion.

The ‘ideal’ does not exist!

Let’s stop buying those body shaming magazines and write to Hollywood and tell them that men and women that are not skinny do not need to only have roles that are laughed at or bring comedic value. More humanness, more realness in leading roles.

We need to saturate ourselves in different body shapes and types and help our eyes adjust to the new ideal, whatever we are is the ideal. We need to brainwash the bullshit out from our eyes and minds and re-programme the truth back in.

What’s your experience of being beautiful?